LGM Products’ delivers marine approved fire detection systems all over the world. Often these systems are used for either new builds or retro-fit of older vessels.

Recently, we have been involved in two very unusual projects! Both the Pailebout Santa Eulalia in Barcelona, Spain, and the Galeb in Rijeka, Croatia, are historic vessels that have been renovated to be part of local museum exhibits to educate and inform about the history of the marine industry in Barcelona and Rijeka, respectively. 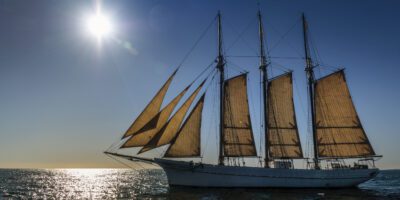 The Pailebout Santa Eulalia is a wonderful example of a historic three-masted vessel, which has been restored to the delight of anyone wishing to learn a little bit more about Spanish seafaring past. Built in 1918 the vessel was original called Sayrernar Uno.

From 2018 it has undergone extensive renovation including a brand new fire detection system. An 8 zone Esento Marine conventional control panel was installed alongside Orbis Optical Smoke and Heat Detectors.

Alarms are now announced by the VTB marine sounder beacon.

The new system is fully approved to MED, LR and ABS marine class certification and will ensure the safety of the vessel for all of those who enjoy visiting her while in Barcelona.

The Galeb refurbishment is part of the Rijeka 2020 European Capital of Culture program. The Galeb is being renovated into a maritime museum which will also incorporate visiting exhibitions, a cinema space and host creative workshops.

However, the Galeb has led a significantly diverse life to get to here!

Built in Genoa in 1938 as a cargo vessel. In the war it was captured by the Nazi navy and repurposed to deploy sea mines. Allied troops sunk the ship 1944. In 1947 it was hauled out and refurbished in the city of Split. In 1953 it was commissioned by the Navy and renamed the Galeb. It was then used by Yugoslav dictator Tito as a floating residence while on foreign state visits.

Most notably in 1953 it was used while Tito had talks with Churchill in London. It served this purpose until 1979 when it was decommissioned from the Navy.

In the1990s it was bought by a Greek Ship owner who went bust and led to the vessel falling into disrepair.

In 2006 the Galeb was repurchased by the Croatian government who sited the ship as a state cultural asset.

In its latest lease of life it will be part of the Rijeka City of Cultural program and is currently undergoing extensive renovations costing 46.8m HRK.

A very small fraction of that(!) will be going on a new addressable fire detection system. A new 3 loop FireFinder Marine fire control panel alongside Discovery marine optical and heat detectors will be incorporated. To ensure the Galeb is safe to sail again.

The FireFinder Marine was selected for its easy function of marine specific programming. This included the Voyage Data Recorder output and the Muster Alarm signalling.

The Galeb has lived a very interesting life and it is fantastic that it is now safe to tell its tale and educate those who come aboard.