Get this information as a PDF…

In the many industrial processes where flammable materials are handled, any leak or spillage may give rise to an explosive atmosphere. To protect both personnel and plant, precautions must be taken to ensure that this atmosphere cannot be ignited. The areas at risk are known as ‘hazardous areas’ and the materials that are commonly involved include crude oil and its derivatives, natural and man-made process gases, alcohols, dusts, carbon dust, flour, starch, grain & fibres.

At one time, pneumatic control was widely used in such environments for its inherent safety but, although much pneumatic equipment is still in use in many parts of the world, it is now seldom chosen for new instrumentation systems due to its limited capability.

To enable electrical equipment to be used in hazardous areas, eight different ‘explosion-protection’ techniques have been developed over the years. National or international standards and codes of practice govern each technique and define in detail how the equipment should be designed and applied. National certifying (or approvals) authorities ensure design compliance and national inspectorates (or insurance companies) vet and usually inspect each installation. The different techniques lend themselves to different applications and, for instrumentation used in process measurement and control, the two leading techniques are the use of ‘flameproof enclosures’ and ‘intrinsic safety’.

With the flameproof technique, known as ‘explosionproof’ in the USA and Canada, hazardous-area equipment is surrounded by a strong enclosure which can withstand internal explosions without igniting the external atmosphere. This technique, which has been in use for over 80 years, allows high power levels but has the disadvantages that the enclosures are heavy and expensive and must not be opened without first disconnecting the electrical circuit or obtaining a ‘gas-free certificate’ for the relevant plant area.

By contrast, in the case of the IS technique, the electrical energy in hazardous-area circuits is deliberately restricted such that any electrical sparks or hot spots that may occur are too weak to cause ignition. This is achieved by inserting an energy-limiting interface in the wiring between safe and hazardous areas. The interface passes signals in either direction as required but limits the voltage and current that can reach the hazardous area under fault conditions. It may be integral with the safe-area equipment or separate for greater flexibility. First developed in the United Kingdom between 1914 and 1916 for use in coal mines, IS came into its own for other applications in the early 1960s with the introduction of the ‘shunt-diode safety barrier’ based on the voltage-limiting, Zener diode. Since then, IS has been developed as a technique and used increasingly until it is now the preferred solution in most markets.

The main reasons for the continually increasing popularity of intrinsic safety are as follows:

Progressive harmonisation of standards governing the design of IS equipment, is taking place. This will allow the same product to be sold and used in many countries without any variation. 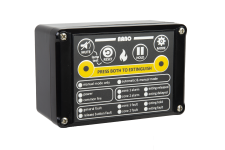 Keep in the loop

Get LGM product news by email

Find us on LinkedIn